How different would girls’ lives be if we were intrigued by their minds?

This week I read a research summary which highlighted some alarming outcomes, given that we are well into the 21st Century. In essence the findings of the various studies included:

As I said, alarming. What lessons do we take from research studies such as these? It is so easy to fall into traditional patterns of behaviour that are continually reinforced by the media, and which are now an entrenched part of our daily lives through social media. Let us be ever conscious of the language we use, and the actions we take, because they contain the unconscious and subtle messages that communicate where a person’s unique value lies. When we are speaking to our girls, let us recognise and praise their minds and hearts, their capacity for thinking and compassion, their generosity and leadership, the capacity to be a great friend, their courage, and their inherent goodness and worth as human beings. Let’s drop the words pretty, beautiful and gorgeous, unless we are describing another facet of what makes them unique, other than their looks. It is up to us to act consciously and with intent if we are to break these insidious contributors to gender inequality, and if we want to achieve the full participation and flourishing of our girls in society, in the workforce, and in their own lives.

Unfortunately, the Father/Male Mentor/Daughter Activity Night is unable to proceed due to current restrictions. I would like to acknowledge the work of the Parents’ Association, who continue to meet in the online world, and search for ways to make a creative response to the times we are in.

After an extensive process of applications, interviews and voting, this week we appointed our 2021 College Co-Captains. Four final candidates entered the final stage of the election process, and demonstrated a tremendous amount of courage as they put themselves forward to be scrutinized by the College community. It was a very close vote, which showed that the community saw a drive and passion for the College, in each candidate. Thank-you to the candidates for their flexibility and adaptability, in what was a new way to conduct our student elections, and for being a part of this process.

It is with great pleasure, that I introduce our College Co-Captains for 2021: 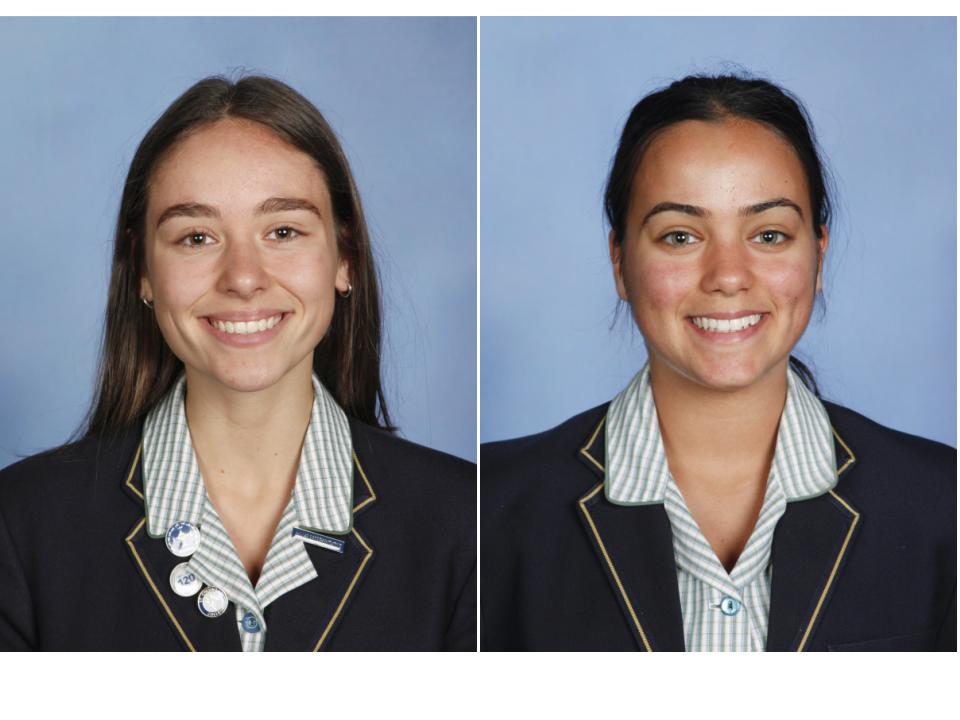 Let us pray together on this Justice Sunday Prayer…

Jesus, you invite us all into the fullness of life.

May we support one another to flourish in body, mind and spirit.

Strengthen our commitment to ensure

that nobody falls through gaps in our systems of care.

Help us to recognise you in those who suffer mental ill-health today.

Show us how to eliminate stigmatisation of mental ill-health

from our parishes, schools, communities and organisations.

You drew near to those who were suffering in body or mind.

May we too feel your nearness when we struggle with mental health challenges.

May we be one as members of Your Body.

You invite us to share in your ministry of love and true compassion.

May we be empowered by your Spirit

to reach out to all people in need.

May we build communities of welcome and inclusion.

Conversations with the Leadership Team

As one way of building ‘Connected Communities’ which promote positive relationships and partnerships that support the learning and wellbeing of your daughter, we are eager to connect via Google Meet. This will be the last ‘Conversations with the Leadership Team’ for 2020.

This is a great opportunity to share what is happening at the College and hear your feedback.

Families were sent an invitation with an RSVP link via email.

If you have any further queries, please email events@columba.vic.edu.au.

We look forward to meeting with you then.

Parents and guardians are invited to meet with the Principal, Head of Students and myself on Monday 14 September. This provides us an opportunity to outline the final weeks of your daughter’s schooling at the College and the arrangements, for the various celebrations being planned, to acknowledge our Year 12 students. A letter, providing further details, will be sent in the coming weeks.

In term 4, we will be celebrating the wonderful achievements of our students throughout 2020. Not only do we want to celebrate all that they have achieved at St Columba’s College, we also want to acknowledge their achievements beyond our school setting.

If your daughter has been successful in an external endeavour (eg. passed a Music examination, represented the state in a particular sport etc) this year, please forward the following to Tanya Almeida via this email address (almeidat@columba.vic.edu.au):

This coming Sunday we celebrate Social Justice Sunday and we invite you to read the important statement issued by our Australian Catholic Bishops. The COVID-19 pandemic is affecting the mental health of many members of our parishes, schools and communities. Understanding mental health will help us to be aware of those who need our support. In the Social Justice Statement 2020-21, To Live Life to the Full: Mental health in Australia today, the Bishops invite us all to reject stigmatisation, to work for the transformation of social determinants of mental ill-health and to call for policies and service provision that meets the needs of the poorest and most marginalised members of our community.

It is that time of year again, where the running community of St Columba’s College team up with St Bernard’s College to raise awareness, support and funds for marginalised members of our community. This year’s charity is the Sisters of Charity Foundation

The Sisters of Charity Foundation provides support to the most disadvantaged through their Community Grants, Tertiary Scholarships and Asylum Seekers Housing Programs.

On September 19 and 20, our runners will be challenged to complete a 16km run. With the support of our sponsors Centec, Academy Uniforms, Benny & Me, Barry Plant, Bentons Finer Bathroom, Ryan’s Bus, CFS, Melbourne Business, Noones and ADD Air Conditioning we are looking to raise as many funds as possible. Please visit our Go Fund Me page, here, to donate.

All funds raised will be donated to the Sisters of Charity Foundation. 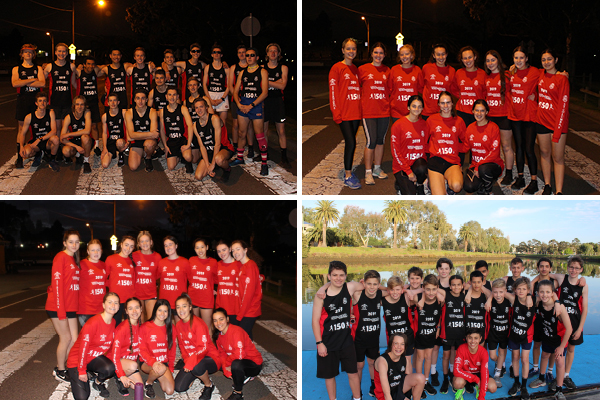 On Monday August 3rd, Year 11 students who participated in the 2020 Birdman Rally as well as the Year 10 STEM class, were given the opportunity to go on a virtual tour with our host FLTLT Aimee Heal from the Royal Australian Air Force (RAAF). Initially students were invited to visit Essendon Airport for an immersive experience on how pilots prepare to fly and to see the PC-21 in real life, however due to the current climate of COVID-19, this was switched to a virtual tour. The PC-21 is the world’s most advanced pilot training aircraft and is based at the RAAF Base in East Sale Victoria, from where FLTLT Aimee live streamed to us here at St. Columba’s College.

The live stream tour offered an insightful perspective of what their jobs are like over at the RAAF. From learning how to put on the flying suit to learning how to fly, it is a lengthy training process for anyone wanting to join the RAAF. Aimee started us off in the main office, where it was busy with people, she then took us to their locker rooms and explained all the different parts of the flying suit, which is much more complicated than it looks! After the suit was all set up and explained, she showed us one of their aircrafts at RAAF and provided us with a demonstration of how to get ready for a flight. After many flicks of buttons and connections of cords, the aircraft was set to go. We then proceeded to ask many questions and Aimee finished up the tour. 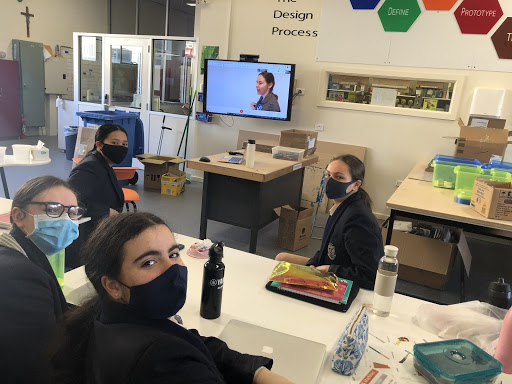 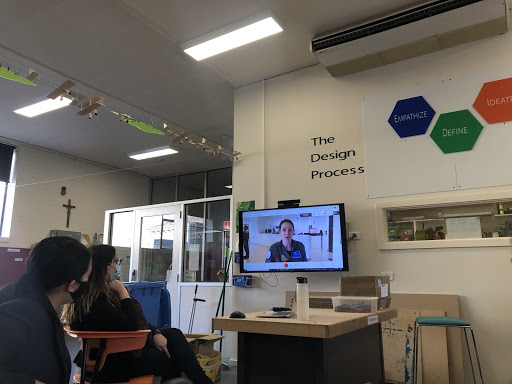 On Thursday the 27th of August, the de Lacy community celebrated their Feast Day, commemorating the life and achievements of their House Patron, Sister Mary Baptist de Lacy. Whilst the girls were unable to participate in our usual festivities, Ms Condello, our House Leader, together with the House Teachers, House Reps and myself led the girls in a Feast Day Liturgy, which acknowledged de Lacy’s work with our House Charity, Briar Terrace.  Although there was no cake or lunch to be shared this year, the girls of de Lacy House still managed to show their House Spirit, in a sea of pink clothing to celebrate this special occasion.

Happy Feast Day girls and looking forward to sharing a lunch with you very soon! 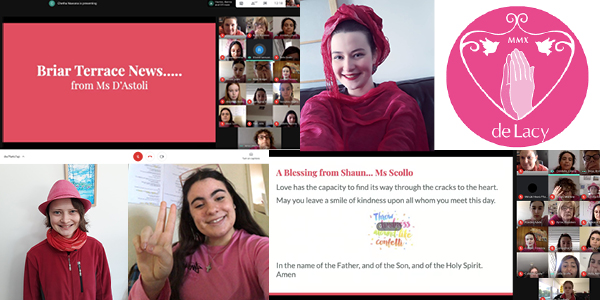 YEAR  7 AND  8 COME AND JOIN THE REMOTE TUTORING  GROUP

HOW :  visit the Student Bulletin to gain access to the Google Meets link

The group is facilitated by Olga Angelini, a Learning Support Officer and Suzanne Krajcer, the Learning Diversity Team Leader.

The MEET link will be available on the student bulletin each Thursday. 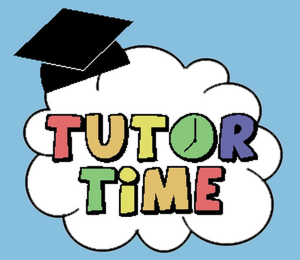 This edition of the Careers News features :

Catholic Education Melbourne (CEM) has reviewed the enrolment dates for Year 7 2022 due to the impact of COVID-19.  As a result, the enrolment timeline has been extended with new dates listed below:

If your daughter is currently in Grade 5 and you wish to enrol her at the College, please ensure you submit an application form by the designated date.

Due to the current COVID-19 situation and reintroduction of Stage 3 restrictions, the Scholarship Testing date has been rescheduled.

Details about the scholarships on offer and online registration are available on the College website.

Take the next step