And that’s a wrap!

Congratulations to all of the staff and students involved in a brilliant College Musical.  The final show on Saturday evening was a spectacular performance, full of energy and excitement, as months of hard work and endeavour were coming to an end.  While the performers certainly deserve our admiration and appreciation, shows of this calibre cannot proceed without the effort and industry of all those who choose not to be in the limelight – from the backstage crew, through to the AV and lighting techs, to those supporting with set design and construction and hair and make-up.  A wonderful effort of team-work and collaboration all round to deliver a brilliant piece of musical theatre.  I am sure there are many of us looking forward to what next year’s musical will bring.

Despite efforts to engage girls in STEM (science, technology, engineering, and mathematics), recent HSC data shows that girls’ involvement in higher-level maths is steadily declining — yet data from the Victorian Certificate for Education shows that girls at single-sex schools are 85 percent more likely to take advanced mathematics than girls in co-ed schools.

At St Columba’s, our students are confident to select subjects in a broad range of fields, and we encourage them to pursue their areas of interest, talent and ability.  The “Girls in STEM” argument is not limited to the representation of women in these fields.  It is about ensuring that girls have the confidence and support to break away from gender stereotypes and consider the whole spectrum of study and work options available to them.

As we move into subject selection time, it is important for students to think carefully about the pathways they would like to follow and to reflect on their learning and assessment feedback.  They should use this information to design a program that will inspire them to excellence in meeting the goals they aspire to achieve.

Click on this link to read the full article.

July 31st is the feast of St Ignatious of Loyola but why does that have anything to do with us?

Mary Aikenhead was imbued with the Ignatian heritage which continues to inform the Sisters of Charity.

For her initial formation in religious life, and to prepare for the founding of the congregation, Mary Aikenhead travelled with her first companion Alicia Walsh to the Bar Convent in York.

From 1812 to August 1815, they lived under the guidance of the Loreto Sisters whose own congregation was grounded in Ignatian spirituality.

As young women began to join the congregation, Mary Aikenhead built their formation experience on the Spiritual Exercises, frequently reminding them of the great gift that God had bequeathed to them through the inspiration of St Ignatius of Loyola.

They were to be contemplatives in action, seeking always to live in the presence of God, discerning God’s will, and finding God in all things.

The Awareness Examen has become a core dimension, a daily practice, of Ignatian Spirituality.

St Ignatius recommends that we spend about ten minutes at the end of our day reflecting on where God has been gently nudging us to a deeper awareness of His presence in the events and especially the people we encounter in the ordinary events of our day.

This is not so much a head experience, though of course we are also thinking back over our day. But what is important is the feeling these moments of recall evoke. You will remember Ignatius’ growing awareness during his convalescence of the interior movements of the Holy Spirit identified with his feelings rather than his thoughts as such. He came to trust these interior movements as reliable indicators of where the good Spirit was leading him. 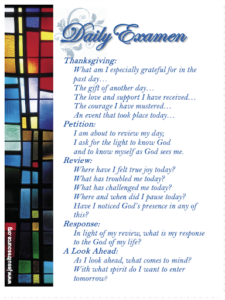 One of the major events being organised to acknowledge our 125th anniversary is a Gala Dinner to be held on Friday 2 September at the Park Hyatt, Essendon Fields. A feature of this evening will be a Silent Auction which we hope will allow us to raise funds to support the important work of the Sisters of Charity Foundation – an organisation that assists those who are marginalised.

We seek your support for this major fundraising initiative. If you are able to assist in any way, whether that be through providing a product, voucher or monetary donation, we would be most appreciative and would look to recognize your contribution on the evening, as well as on any printed or electronic material produced for the event.

If you have any questions in relation to the above or are able to assist, please contact Donna Kellett on 9337 5311 or kelletd@columba.vic.edu.au.

We hope to see you at this special event!

On July 21st, Williams House celebrated our House Patron, Sister of Charity, Sister Mary Xavier Williams. Williams students were given a blue ribbon to wear for the day as a visual symbol of their connection to our house. We came together at lunch time to join in liturgy and give thanks to the fine example Sr Williams provided us with, especially her words, from which inspired our house theme for this year. “Never allow yourself to be overpowered by the apprehension of an evil which may never arrive.”

Our house theme for this year is, “Embrace challenges with courage and compassion” It is particularly relevant after two years affect by COVID and the ongoing situations we face. Whether it be the challenges of getting back into study habits, reconnecting with friends or the day to day challenges of being a teenager in today’s world, having the courage to not only face those challenges but embrace them, knowing you’ll come through stronger on the other side, is something to aspire to. And we don’t have to do it alone. Having the compassion for every other person going through similar battles is what makes us Williams House. Looking after others in tough times and not focusing on our own situation is a huge ask, but one that benefits us all.

Sister Mary Xavier Williams said, “Never allow yourself to be overpowered by the apprehension of an evil which may never arrive.” Sometimes the battles within us are fought, and lost, before they’ve even arrived. In our liturgy, we remembered those words and remembered that we are strong, courageous and can rely on the compassion of each other to get through anything.

We then shared in a pizza lunch and an amazing cake, organised for us by Linh Speranza, who was a true example of embracing challenges with courage and compassion. We genuinely thank her for her work. I’d also like to thank our Williams staff, our House Group Teachers and all the other staff volunteers who helped on the day. Finally, a big thank you to Keely Forbes, for her organisation and leadership in creating such a fitting tribute to Sister Mary Xavier Williams. 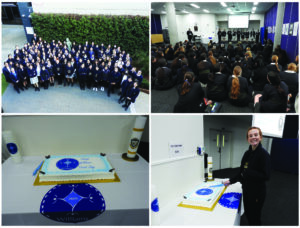 In Unit 4 Chemistry, we are currently learning about spectroscopy, a technique that can be used to analyse organic compounds. In line with our course work, we attended an excursion on Tuesday, the 19th of July to Monash University, along with our Year 12 chemistry peers, our teacher Ms Susanty and lab technician Ms McLoghlin.

This excursion provided us with a clearer understanding of the content, as we were able to put our theoretical knowledge into practice. We were able to use the facilities that are available in the Chemistry laboratory at Monash, such as the infrared spectroscopy (IR) and nuclear magnetic resonance (NMR) spectroscopy. The teachers at the campus also shared their expertise on how IR, NMR and mass spectroscopy can be used to determine the structures of molecules that were present in an unknown sample.

Not only was this excursion beneficial for our learning, but it also gave us the opportunity to experience what a future career in the Chemistry field could potentially look like. We are very grateful and privileged to be able to have this opportunity to further our knowledge and understanding on organic Chemistry and real life application of various spectroscopy tools. We are thankful to all the organisers of the excursion. 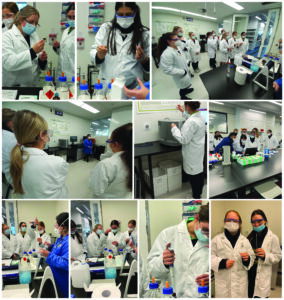 On Friday the 22nd of July, six St Columba’s students and Ms Timoney attended Scotch College for the Junior Thriving Minds Conference. The day was designed for students to be able to work with like minded students to discuss topics that stimulate independent and creative thinking, connect different areas of study, upgrade student’s critical abilities and encourage a philosophical perspective.  To guide us through the day we were lucky enough to have Julie Arliss, founder of ‘Academy Learning’ from University of Oxford,  who had travelled all the way from the United Kingdom to be at Scotch College with us.

The day began with a university style lecture about Quantum Physics, the microscopic world of atoms. It was fascinating to learn about how incomprehensible Quantum is and that no one in the world truly comprehends how it really works. Which explains why Julie Arliss said, “If by the end of the session you understand any part of Quantum then I haven’t explained it well enough.”

In the next session we moved into groups to participate in a smaller conversation about whether people should be allowed to eat meat. The groups considered the cruelty of factory farming as well as the opposing side to the argument that we as humans are also animals and therefore are a part of the food chain and should be allowed to eat other animals just as they do to one another.

After a quick break we dove into our third session which was another lecture, this time about Justice, Truth and Beauty. Julie Arliss explained how the idea of Justice, Truth and Beauty isn’t taught in schools, they are commonly known concepts from a young age but the lecture encouraged us to question how this came about and if justice does not have a structure then how is it fair to punish someone if they believe it to be just.

The last session involved an insightful debate performed by Julie Arliss and a highly talented Scotch College student volunteer. The topic was that freewill is an illusion. The lecturer argued that our genetics control who we are and our every action, while the Scotch student persuaded the majority of the audience to believe that even though genetics may influence a person’s life, the individual is still able to decide on what path they will take in life.

Overall, this day has given us insight into real world questions that scientists are still attempting to answer and these questions have stimulated our minds to think beyond the classroom. We were all so grateful for this opportunity and would like to thank Ms Timoney for all of her efforts in organising for us to attend this very insightful day.

Do you have a daughter currently in Grade 5 and wish to enrol her at St Columba’s College? If so, please take note of the following enrolment dates for Year 7 2024:

Online applications are open for Year 7 2024 and can be accessed here. Please ensure you submit an application form for your daughter even if you already have a daughter at the College.

Take the next step